Next Step: Using the Brain

The Next Step: Using the Brain to Create Change 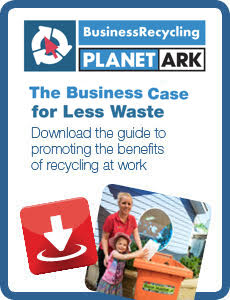 Once you've made the case for less waste it’s important to build support across the workplace, establish the new practices, review and, if necessary, change them after a trial period and then communicate challenges and successes with stakeholders.

Psychological research has identified many simple tips for encouraging behaviour change among workmates. Below are six from the BusinessRecycling Behaviour Change Made Easy series to help you on your way.

Research shows that encouraging people to commit to a small, easy change is likely to entice them to commit to a bigger change later. So begin your change processes with small and easy actions like providing a paper recycling bin adjacent to the waste bins. It’ll help increase paper recycling and prime people to adopt other changes later on. And the easier the behaviour is, the more people will buy in. Putting a paper recycling tray on every desk will result in even more paper being recycled than setting up bins (which people have to walk to). Find out more about small steps.

Humans are social creatures and our behaviour is strongly influenced by ‘the group’ (more so than we like to admit). This phenomenon is called social proof and is an effective change strategy. When encouraging change highlight that the desired behaviour is a common one, that it is undertaken by ‘the group’. So a message like ‘Thanks to everyone for recycling,’ will be much more effective in motivating action than ‘Everyone keeps putting the wrong things in the recycling bin’. The research shows the latter message will actually encourage bad behaviour because it reinforces the idea that others are doing it wrong. Find out more about Social Proof.

Hit ‘em Where it Hurts

Human brains feel the pain of current loss more than they feel the joy of future gain. Which is a useful tool for creating change. When making a financial argument, frame it in terms of loss rather than gain. Research shows that saying ‘We are wasting $300 a week on skip bin collections,’ is much more powerful than ‘We could save $300 a week by changing our bin collection’. Find out more about loss aversion.

Clear, concise and informative signage is one of the strongest tools you have to encourage appropriate recycling (and other) behaviour. However, poor signage is surprisingly common. Effective signage should be: noticeable, with eye catching colours and images; self-explanatory, with a clear action; as close to the location where the desired behaviour will take place as possible; and, positive; nobody likes to be bossed around by a sign. Find out more about setting up effective signage. Putting paper recycling trays on desks with the right signage will result in more recycling.

Respecting individual autonomy is a powerful tool in encouraging change. Research on more than 22,000 people shows that adding phrases like ‘You’re free to choose’ or ‘Don’t feel obliged’ is likely to double the compliance rate. Find out more about the positive power of choice.

Adding a handwritten Post-it note to a survey form increased the response rate in one study from just 36% to an impressive 78%. This effect is created by the psychological concept of reciprocity. The recipient of the Post-it recognises the extra effort that went into the note and feels a need to reciprocate. Psychologically speaking we humans simply dislike feeling indebted to other people! Where possible, use personal touches to encourage change. Find out more about the power of the personal touch.