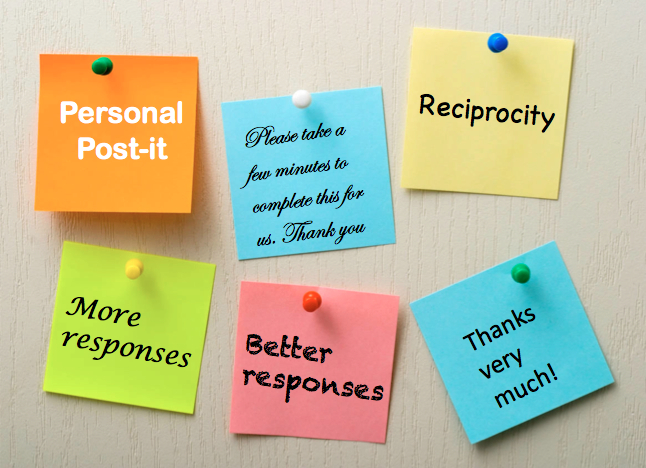 If you are trying to encourage colleagues (friends or students) to provide you with feedback on a green policy or to undertake a new behaviour a simple little trick in personalising the message can have a big impact.

The trick is simply to add a handwritten post-it note to your request and the chances of the person responding jump up dramatically.

This effect was found by Randy Garner, a professor of behavioral sciences at Sam Houston State University in Texas. To test the effect he randomly chose 150 full time faculty members at a university to receive a request to complete a five-page survey on the university campus climate, which he sent though the internal mail.

The surveys were divided into three groups:

The handwritten message was simply,"Please take a few minutes to complete this for us. Thank you!" There was no message on the last groups' survey.

He then waited for the surveys to come back and measured the response rate for each of the groups.

The startling results were as follows:

But wait, there's more. Not only did more people return the survey when it had a handwritten post-it note on it but they returned the survey more quickly and they gave more detailed answers. And by adding his initials and ‘Thank-you' to the note the response rate was even higher.

So why does this trick work? The researchers believe that the recipient recognises the extra effort and the personal touch and feel they should reciprocate for the effort. The idea of reciprocity says that people feel compelled to return a favour with another favour. It's why free gifts are so effective as marketing tools. Psychologically speaking we humans simply dislike to feeling indebted to other people!

Make It Work For You

So how do you make this trick work for you? Well, obviously, if you're running a hard-copy survey, stick a handwritten post-it note to the front and you're likely to get a better response. You could even try putting a post-it on someone's desk or computer if you want them to do an on-line survey and see what happens. (The research doesn't cover this but it still uses the power of reciprocity.)

You could also use the post-it trick if you need someone to read or comment on a report, evaluation, policy or suggestion or to acknowledge someone for something they've done (and you want them to keep doing) like turning off their computer overnight.