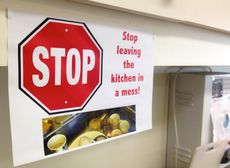 An example of signage highlighting the behaviour you want changed.

They're common in almost all workplaces, the sign telling people to turn the lights out when they leave a room or the e-mail bemoaning the mess in the kitchen.

But what's written on that sign or in the e-mail can have a significant impact on how effective it is and whether it has a positive or a negative impact.

A classic study of the effect of signage on behaviour was carried out in the Petrified Forest National Park in Arizona in the US and shows just how easy it is to get it wrong.  The park contains beautifully fossilised wood and animal bones that are scattered around the dried canyons, which are subject to theft.

To test the effects of different signs a group of researchers installed two different signs in two areas of the park as well as leaving one area with no signs to act as a control.  They then secretly marked pieces of wood in all three areas so they could measure the level of theft.  The signs read:

Rather than preventing theft the wording of that sign almost tripled the rate of theft, it turned into a crime encouragement message!

So what's the lesson here?  How does signage in a national park relate to the workplace?  Put simply, whether the sign is about saving energy in the office or looking after a natural location we, as a group, respond in similar ways. We take many of our cues from the people around us. So when you're sending a message about the behaviour you want to see it's important to send and reinforce the right cues.

It can be difficult to frame something positively - especially if you get annoyed walking into a room with all the lights still on - but focus on encouraging the right thing, rather than highlighting the negative norm. Reinforce the idea that most people are doing things the right way.

For more tips on the writing effective signs see Sending the Right Signs article, part of our Behaviour Change Made Easy series.