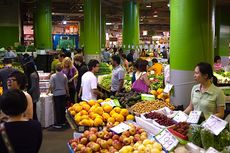 Sydney Markets won from over 2,500 international entries received for the award. It recognised Sydney Markets for its innovation and commitment to sustainable business practices, closing the loop and reducing its environmental footprint through waste management, recycling, water and energy savings.

Sydney Markets has invested resources and equipment in its recycling program which has reduced its waste disposal costs by over a whopping A$7 million since 2005. Impressively, it has also increased its resource recovery rate from 17 percent in 2005 to 65 percent in 2013 by implementing a number of initiatives including:

Other initiatives have been put in place to collect fluorescent tubes, light bulbs, batteries and other e-waste. Water recycling plans will be incorporated in Sydney Markets' environmental management plans in the near future.

You can find further information here.